Sexual harassment is a prevalent problem in workplaces in Los Angeles and throughout California. At Mathew & George, we stand up for the rights of workers who suffer sexual harassment, discrimination, and assault at work. Our Los Angeles sexual harassment attorneys have years of experience representing victims in cases against large corporations, Fortune 500 companies, insurance providers, and other powerful defendants. If you have suffered any type of sexual harassment, call (310) 478-4349 for a free case consultation with our attorneys.

What Is Workplace Sexual Harassment?

Sexual harassment can also refer to harassing, bullying, or mistreating someone because of their sex. Treating a supervisor with a lack of respect because she is female, for example, is an example of sexual harassment. Sexual harassment is often a tool used by perpetrators to keep a victim in a certain place within the company. A male manager, for instance, may sexually harass a female employee to maintain the hierarchy of the male sex. Sexual harassment for power and control is more common than for sexual reasons.

What Does Sexual Harassment Look Like in the Workplace?

Have You Experienced Sexual Harassment?

Remember that victims and harassers can be either men or women, and a victim and harasser can be the same sex. Sexual harassment can also exist between people of any position at the company, from independent contractors to CEOs. It can also be committed by people outside of the workplace, such as clients, customers or contractors. The important factor is whether or not the conduct is unwelcome.

Laws Against Sexual Harassment in Place of Employement

This is not a full list of all of the laws, regulations, and statutes that may apply to your Los Angeles sexual harassment lawsuit. These are the main laws, however, that will allow you to come forward with a complaint and file a lawsuit for the losses you suffered due to harassment or discrimination. Our attorneys at Mathew & George can review the laws in more detail with you during your case. 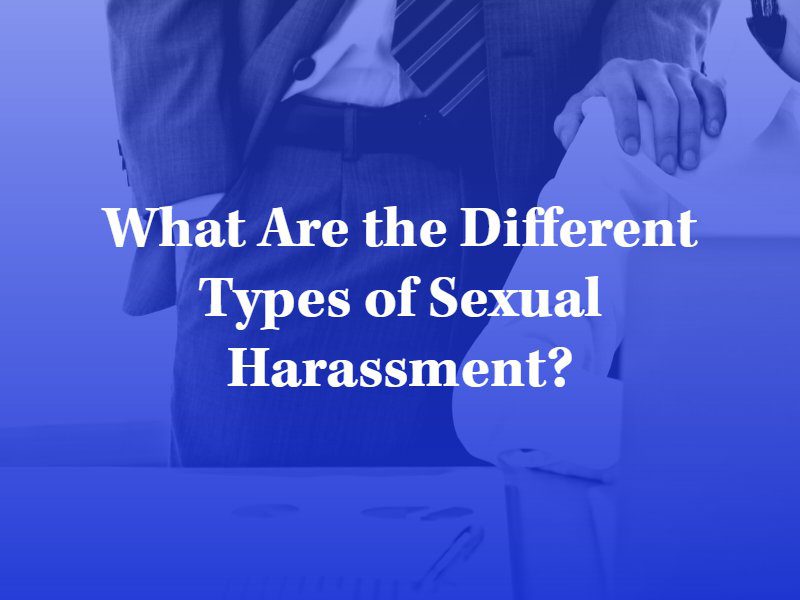 What Are Different Types of Sexual Harassment?

Quid pro quo – or “this for that” – is another phrase for requests for sexual favors. This type of sexual harassment occurs when an employer, supervisor, or someone in a position of power makes an employment benefit contingent on sexual behavior. In exchange for sexual favors, an aggressor could offer:

Quid pro quo can also occur if a coworker threatens retaliation if the employee doesn’t agree to the demands. This can include:

It is illegal if a supervisor commits even a single action of quid pro quo sexual harassment. Even if the employee doesn’t yield to the demand, it can serve as the basis for a lawsuit. Employees who suffer this type of harassment must be able to report their incidents without any risk of retaliation. Unfortunately, many organizations are guilty of retaliating against employees who come forward to report sexual harassment. If this is a concern of yours, contact an attorney to help you with your case. A sexual harassment lawyer in Los Angeles will understand the harassment itself and the retaliation for reporting such incidents are illegal.

Unlike quid pro quo harassment, a hostile work environment is a much broader category. This means that harassment behaviors are so severe or pervasive as to create an environment where the worker feels that he or she cannot be productive, or where the worker feels threatened or intimidated. It encompasses activities that many people may not even realize are forms of sexual harassment, such as:

When Is a Company Liable for Sexual Harassment?

According to the EEOC, an employer can be vicariously liable for the harassment behaviors of its employees, including managers and supervisors. An employer is automatically liable for harassment by a superior that results in an adverse employment action for the victim, such as job termination or lost wages. Automatic liability means that the victim does not need to prove the business was negligent to qualify for financial compensation.

An employer is only liable for sexual harassment by regular employees or others, such as customers on the premises, if the victim can prove that the business knew or reasonably should have known about the incident but failed to take the correct actions to remedy the situation. An investigation of the sexual harassment incident will determine the circumstances that surround the case. From there, your lawyer can craft a legal strategy based on what is required to prove liability.

Attorneys Here to Help: Compensation in a Sexual Harassment Lawsuit

At Mathew & George, our main goal for your case is to get you justice. This means holding a harasser and/or company accountable for its mistakes and wrongful actions. It also means pursuing fair and full financial compensation for the losses that arose from the sexual harassment incident. We believe that you should be adequately compensated for the economic and non-economic damages that you suffered as a consequence of sexual harassment. Our attorneys can help you fight for the following damage categories, among others:

You May Be Eligible for Back Pay

If you were fired or denied due compensation, you can sue for the money you should have earned. This can include lost wages, estimated missed tips or commissions, bonuses, accumulated vacation time, benefits, stock options, or other forms of financial compensation you should have reasonably expected to receive.

In harassment cases that cause the victim to lose their job, the victim will often push for reinstatement to their former position. This can also happen in cases where a person was forced to quit due to harassment or discrimination. Due to the nature of some companies and businesses, reinstatement is not always reasonably possible, or practical. The relationship between the victim and the harassing employer may have been too hostile to warrant a return. In these cases, a judge will award compensation for the time spent between jobs after they leave or lose a position.  Our sexual harassment attorneys can help you figure out the next steps.

Many sexual harassment victims do not realize that they are eligible for compensation for their pain and suffering, as well. Sexual advances of any kind can be psychologically distressing. “Pain and suffering” is the legal term for the compensation a victim receives for the harm caused by the harassment. This can include physical pain, mental anguish, stress, strain, post-traumatic stress disorder, fear, anxiety, depression, lost quality of life and inconvenience. Proving pain and suffering can be more difficult than financial losses. In some cases, it will depend on testimony from an expert witness.

How Long Do You Have to File a Sexual Harassment Claim in California?

Assembly Bill 9, signed into law in 2019 by Gov. Gavin Newson, became effective on January 1, 2020. This law extends the amount of time that an employee has to file a harassment or discrimination claim with the Department of Fair Employment or Housing from one year to three years from the last act of alleged misconduct. Once the Department gives the plaintiff a Right-to-Sue letter, the claimant has another year to file a lawsuit. Contact a Los Angeles sexual harassment attorney as soon as possible to avoid missing your deadline.

Mathew & George has the knowledge and resources to create a strong sexual harassment claim on your behalf serving justice for your case profile. As the top choice for Los Angeles sexual harassment lawyers we can help you settle your matter out of court or face your employer in the courtroom. You may be eligible to receive back pay, front pay, reinstatement of your job, pain and suffering damages, and punitive damages. With help from our experienced lawyers, your claim could give you the financial relief you need to pay your bills and move forward from workplace sexual harassment. It could also hold an irresponsible or criminal defendant accountable for sexual acts. For more information about your claim, contact our sexual harassment attorney serving Los Angeles today at (310) 478-4349 or contact us online to schedule a free consultation.

“I have seen the high level of skill, effort, and passion that Mr. Mathew can bring to a case. On the case in which I observed his work, I respect his practical approach and effort to keep legal expenses under control while still putting on a strong defense.” – D.M.